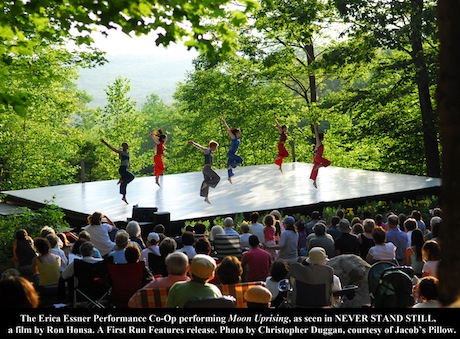 I want to add a few words of praise to the many others already written for Never Stand Still, the award-winning documentary by director Ron Honsa about Jacob’s Pillow Dance Festival (distributed by First Run Features). The film had an oh-so-brief life in theaters a few months ago, and was screened at dance film festivals in 2011, so I’m playing catch up here. Nevertheless, I want to bring it to your attention because this 74-minute movie is a little gem, and I found it extremely affecting.

It does tell the history of Jacob’s Pillow, the oldest and longest running dance festival in the United States. But it’s also a wider story, based on the belief that dancing is a basic human need. Much of the commentary, from performers, choreographers and students, focuses on the spiritual nourishment that dancing gives to dancer and audience alike. Honsa very specifically chose to frame the story this way and it serves him extraordinarily well. You will learn how Ted Shawn founded the Pillow in 1933, first as a home for his all-male dance company, and then turned it into an international dance festival, which he successfully ran until his death in 1972 (the history portions are narrated by Bill T. Jones).

But you will come to understand the Pillow’s soul through the many scenes of dancing there. Honsa has represented a wide range of artists, plus archival footage, because one of the Pillow’s strengths and unique attributes is the diversity of dancing represented there. Honsa shows dancers in performance (how about that outdoor stage in the top photo!), in rehearsal, in class, and at ease in the idyllic Berkshire countryside. The insightful and hearfelt comments of those who have performed there, including Mark Morris, Merce Cunningham, Rasta Thomas, Shantala Shivalingappa (a gorgeous kuchipudi dancer), Judith Jamison and Joanna Haigood (whose Zaccho Dance Theatre is shown above), are oral captions for  the feelings that the movement gives you. Never Stand Still is so-named because that’s what dance is — the body in continuous movement. It did occur to me that viewers who don’t have an extensive knowledge of dance might occasionally feel lost; the film does jump from artist to artist. But, ultimately, I don’t think that’s a problem. Honsa and Nan Penman, co-writer and co-producer, have confidence in the more universal approach they’ve taken, and the beautiful artistry they’ve captured in Never Stand Still proves their point. Dance should appeal to everyone.

There’s more information about the movie here, on the First Run Features website.